The best tamburitza orchestra of the ninth international tamburitza festival “Tamburitza Fest 2016″, which hosted 10 orchestras from seven countries in its competition part from 21 to 25 June, is the Novi Sad-based ensemble “Zorule”. This is the decision of the professional jury of this year’s festival composed of professor Franjo Batorek (Croatia), Spomenko Guzijan (Serbian Republic, Bosnia and Herzegovina) and Danilo Ninković (Serbia). The main festival prize was given to Zoran Bugarski, the leader of the ensemble “Zorule”, who is voted the best prim (tamburitza) player as well. The prize was presented by Jovan Pejčić PhD, the Festival Director. Jozef Kovac from Hungary, the member of “Mohács” ensamble, is the best bas-prim (tamburitza) player while Mario Sesvečan of Croatian orchestra “Uspomena” is the best begeš (contrabass) player. The best new song “Lud za tobom” was performed by the Serbian orchestra “Tajna” and the best vocalist is Stjepan Fortuna from the Austrian band “Gradištanci”. Awards for artistic expression and keeping tradition were given to “Zlatna suza” (Romania) and “Banjalučki merak” (Serbian Republic, Bosnia and Herzegovina), while the audience award went to the orchestra “Garavi” (Croatia). The orchestra “Sremska banda” (Serbia) was awarded by journalists. 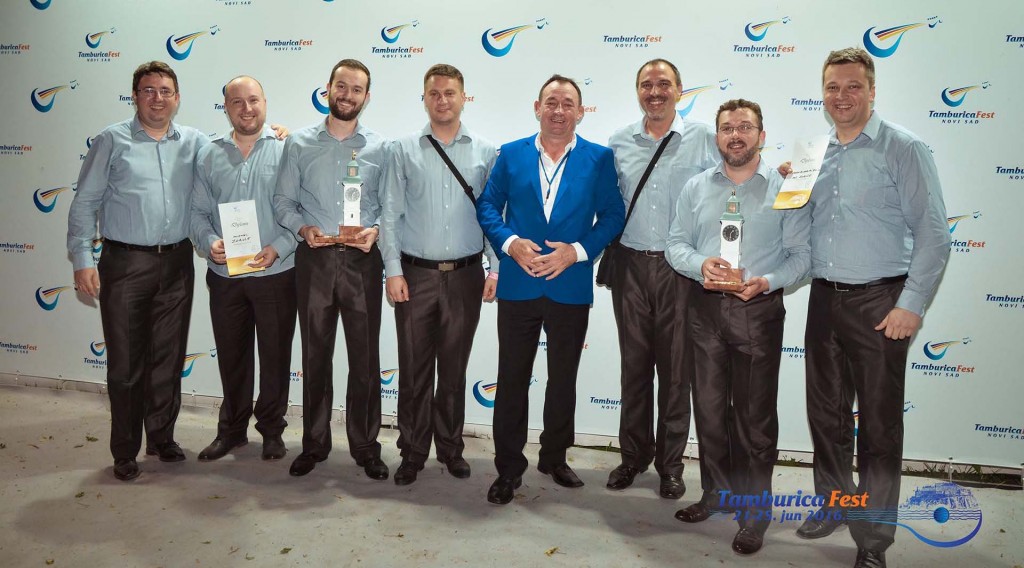 The eighth international tamburitza festival, “Tamburica Fest 2015″, was marked by the performance of Šil dil daj, the orchestra from Croatia, which won the best tamburitza band award. The winners were presented with the award by Jovan Pejčić PhD, the President of the World Tamburitza Association and the creator of the festival.

The award for the best prim (tamburitza) player also went to the orchestra Šil dil daj, that is, to their most distinguished member Dane Meseljević who was presented with the award by Mile Dragić, the President of the company which is the general sponsor of the festival.

The best begeš (contrabass) player was Filip Ćosić, (Za našu dušu), and the most beautiful new song was performed by the City Tamburica Orchestra Banja Luka.

The best vocalist was Nino Veličkovski, the singer of Kumanovski Tamburaši from Macedonia, while the award for besti nterpretation was given to the tamburitza players from Hungary, Bonderšaj. The orchestra Banat from Hungary was awarded for keeping the tamburitza tradition and the media award was given to the ladies’ tamburitza orchestra Ruž from Croatia while the audience award went to the City Tamburica Orchestra Banja Luka.

The jury’s decision was that the winner of this year’s masters of pen and strings’ festival, was the orchestra Vojvođanski san from Pančevo, and they were presented with the main festival award by Jovan Pejčić PhD, the head of the organizing committee of “Tamburica Fest”.
The most beautiful song was written and performed by the ladies’ orchestra La banda from Novi Sad, which also took the title of the most beautiful ensemble at the festival, while Ana Mihaljević, the prim (tamburitza) player of the orchestra Dunavkinje from Mohácz (Hungary) was the best prim (tamburitza) player. The best vocalist was Aleksandra Radović, who performed with the orchestra Kozarski biser from the Serb Republic.
The jury award for best interpretation, artistic expression and tradition keeping was given to the orchestras: Tamburjaši from Slovenia, Taslidža from Montenegro and Đuvegije from Sombor (Serbia). The special jury award went to Savski valovi from Croatia and La Banda from Novi Sad (Serbia).

Tamburitza assembly was held in Deronje on August 30th and 31st 2013. with participation of 11 orchestars in competition, luxuriant revial program and with a lot interesting additional perfomances in front of more than 30000 people from country and region.

On this uniq review the winer was domestic group, well known orchestar “Bice skoro propast sveta“ and they get a right to participate on World tamburitza festival „Tamburica fest 2014“ on Petrovaradin fortress.

Beside great atmosphere, VI World Tamburica fest was hold on June 28th and 29th on Petrovaradin fortress, was marked with Zvonko Bogdan and Halid Beslic performances and a numerous of public.

The public had an opportunity to enjoyed performance of Great Russian orchestra, Cebljanski.

More than 90000 guests for 3 days and 3 nights enjoyed in tamburitza music in Deronje as never before. Tamburitya players played, sometimes just for somebody ear, sometimes on a table, but always in a good mood.

Also, as a special guest of the „Tamburica fest 2009“ group Legende, Ana Bekuta and Zvonko Bogdan  performed a concerts.